View Profile
Saif Ali Khan has taken the character of his next film to heart. For Prakash Jha's Aarakshan, Saif will be getting a chance to play 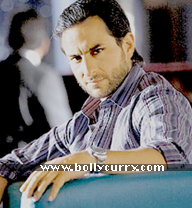 the character of a tabela (dairy farm) owner. For the role, Saif was given the chance to milk a buffalo himself. Apparently, the process really helped Saif in getting into the skin of his character!
Jha is proud of the fact at the amount of focus and effort that  Saif has put on getting all the details for his character and the film right. He believes that although this role is somewhat of a challenge for the actor, he has not shown signs of such at all.
A surprising fact is that a tabela has been set up on sets in Bhopal so that the feel of an actual tabela can be felt. Along with that, there have been approximately 70 buffaloes arranged for filming purposes. With these preparations taken into account, it is obvious that the crew and cast wants to be sure that the film will have an overall convincing look.
We wish Saif all the best for this newest avatar!
Editor(s): Aradhna & Gunia.
Graphics: Pooji.