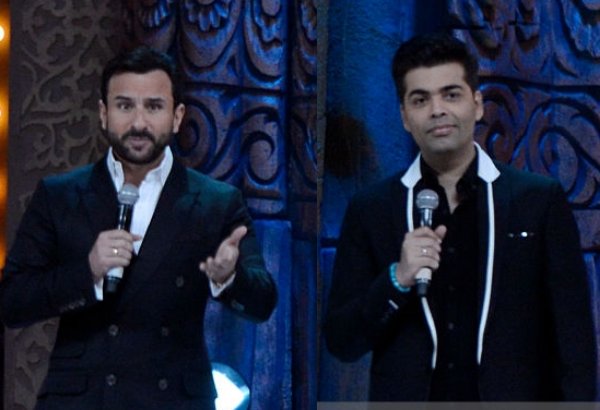 Bollywood star Saif Ali Khan will join the inimitable Karan Johar to host the 18th edition of the International Indian Film Academy (IIFA) Awards in New York next month. He says they have surprises in store.

Saif said in a statement: "I am happy to be back to the IIFA stage this year as I join my close friend Karan Johar to host the IIFA Awards in New York.

"The excitement for IIFA has been steadily growing worldwide. This year it's going to be super fun and glamorous in every way as Karan and I are going to have lots of surprises in store for our fans internationally."

Bollywood's youth icon Varun Dhawan will make is make a debut at IIFA Awards with a performance and he will be also be seen co- hosting a segment of the star-studded awards night on July 15.

Varun said: "It's going to be a grand celebration and I can't wait to be there."

To be held at the MetLife Stadium, the IIFA gala will be a celebration of Indian film, music, fashion and dance.

A day before the main awards gala, IIFA Rocks will regale the audience with a celebration of 25 years of Oscar winning talent A.R. Rahman. It will also feature a medley of musicians including Rahman, Diljit Dosanjh, Benny Dayal, Javed Ali, Neeti Mohan, Jonita Gandhi and Haricharan Seshadri.

Organised by Wizcraft International Entertainment, the excitement for the Bollywood event is already palpable in New York.

This is the second time that the IIFA extravaganza is taking place in the US. It was earlier held in Tampa Bay in 2014.

'Tujhse Hai Raabta' to take a Leap; Checkout their Post Leap ...
37 minutes ago

Karan Johar’s Takht put on Hold; Plans for another film ...
50 minutes ago

Kartik and Naira to Separate AGAIN in Yeh Rishta Kya Khelata ...
58 minutes ago