View Profile
As we shared earllier that a filmmaker has decided to make a movie based on the infamous love triangle of Kareena, Shahid 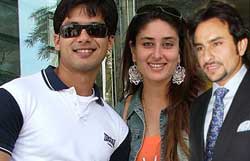 Featured Video
and Saif Ali Khan which has been titled 'The Secret Life of Kareena'.
The spicy and juicy concept of the movie has  stirred quite a lot of interest amongst the audiences. But one person who is not amused is Kareena's beau and actor Saif Ali Khan. While Shahid and Kareena chose to remain silent, Saif has come out in the media and expressed his diapproval regarding the project.
Apalled by the filmmaker's audacity to capitalise on Bebo's life, Saif expressed ' I am a little upset that my character is called Saifee. It should have had a cooler name, Sameer or something like that. But honestly, on a more serious note, it can be very offensive for Kareena. I think it is a tasteless thing to do, trying to get excitement and publicity based on Kareena's life. Abroad, people do write tacky stories based on celebrities' lives, but this is India. I also read on the net that the main character of the film is supposed to be a prostitute; I think that's not funny at all. I am half amused and half disgusted.'
Taking the cue to clear out other controversies, Saif also denied reports that he had used Botox to look younger opposite Deepika Padukone in his latest. He added that it was healthy living along with yoga that helped him attain the look. Furthermore, he has quit drinking and smoking and believes that others should as well.