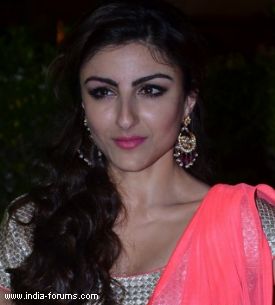 Saif was anointed the 10th Nawab of Pataudi after the death of his father and former India cricket captain Mansoor Ali Khan in 2011.

When asked about the personality traits of her brother in real life, Soha said: "He is very special, and Saif was born a prince."

"He was born in 1970 and in 1971 (under the 26th Amendment to the Constitution) all the princely titles were abolished. So, he was actually a prince for a year," she said.

"Maybe because of that, his style and his taste is so different. Even when he has lunch during shoots, he has a table, table-cloth - he is a genuine nawab," she added.

Soha, who is active in films for about a decade and did films like "Rang De Basanti" and "Mumbai Meri Jaan", says she has shed the girl-next-door image in the comedy, "Mr. Joe B. Carvalho", directed by Samir Tewari.

"It's a comedy film and I got an opportunity to do action and cabaret - so it was fun for me. All this while I have done more of the girl-next-door kind of a role, but in this film I have come out of that image," said the 35-year-old.

In the film, which is coming out Jan 3, Soha has teamed up with Arshad Warsi.

'Billions' Renewed For Season 6
35 minutes ago

Sneha Jain of 'Saath Nibhana Saathiya 2' Sacrifices Her ...
52 minutes ago