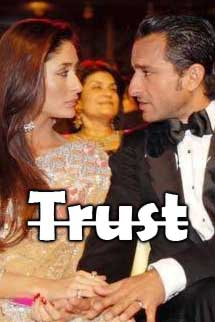 Saif and Kareena have had their share of the limelight. They are probably the most talked about couple in Bollywood these days. And now they are in news for a brand new reason! Apparently, Saif doesn't trust or rather have faith in his lady love. Well, at least in their upcoming spy thriller 'Agent Vinod'!!


In 'Agent Vinod', Saif Ali Khan plays the protagonist, portraying Agent Vinod and Kareena takes her side with the bad guys. Kareena enacts the character of villain who disguises herself as simple girl who is a victim to dreadful conditions. Agent Vinod, is a character of doubt, as far as the credibility of this simple girl and her woes go.


To add on, rumours say that there will be no romance between the two in the film. Kareena's role is expected to shock the audience as our Chote Nawab was eager to cast Bebo in a complicated role as this.


Agent Vinod as per plans, is due to release sometime early next year!
Featured Video