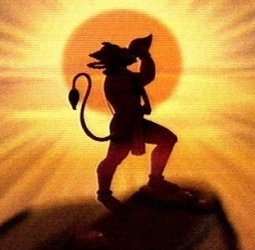 Sahara One which has come up with various mythological shows like Mata Ki Chowki and Ganesh Leela is now planning yet another large scale venture with Sagar Arts which will be based on the life and journey of Mahavir Hanuman..

Our source states, "The show is at a very initial stage with the casting process still on. The mytho is being produced by Sagar Arts and is tentatively titled 'Jay Jay Jay Bajarangbali'".

Talking about the concept our khabroo says, "The show will execute the whole journey of Hanuman from childhood to the span of time where he goes to Lanka, as the Dhoot of Lord Ram. There would be a bit of Ramayan also shown, but the show on the whole will majorly focus on the life of Lord Hanuman".

A spokesperson associated with the show confirmed that Sahara One and Sagar Arts are working on such a concept.

We tried contacting Mushtaq Shiekh, Creative Director, Sahara One and even sent him a text message, but did not get any reply till the time we filed the story.

Watch this space for more details on the show...

frnk 9 years ago I came to know through telly buzz dat the channel will launch CHANDRAKANTA in d month of march 2011 n dis is march now & i haven't seen any promo.

Rituparnaa 9 years ago Hope Sagar Arts will take up a strong team like Ramayan this tme also.

halley 9 years ago thnx 4 the news!!all the best 4 the show

rekhasharma 11 years ago Must say Ms Bachchan has a good PR team. She is losing endorsements left, right and center and her PR team hopes that we will believe in the bull shit being propogated by them. The poor girl has practically no film on the floors, still she is supposed to be nack deep in work. Wake up dear lady, wake up to reality.

Mazzy101 11 years ago thnx, she is qte good in advertising. i thnk she is btr thn katrina! her english movies were good!