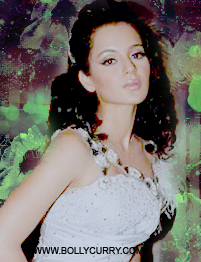 Ratan Jain for Tez and Bhushan Kumar for I Luv NY. While, at the time, the actress hadn't thought of any solutions to solve her problems, it seems that she now has it all figured out and has come up with a foolproof plan to avoid clashes between the makers of her upcoming ventures.

The complication arose when Jain's film called for Kangna to urgently fly out to London for an unplanned but important shoot, an ordeal Bhushan wasn't agreeing to. Being the dedicated artist that she is, Kangna eventually cooked up a turn-around solution of deciding to give up her scheduled week long break from shooting to fulfil the demand. After wrapping up shooting with Jain in London, the actress will be back immediately to resume filming for Bhushan once again.
We applaud Kangna's selfless solution to her scheduling crisis, but we only hope the film's result in success that's worth the sacrifice!