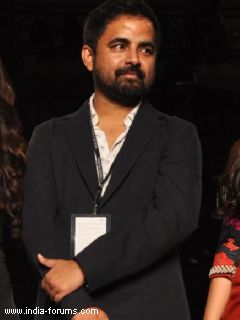 Indian designer Sabyasachi Mukherjee's wedding saris and a range of specially commissioned shawls and headbands will be showcased as part of the 'Inspired by India' selling exhibition of contemporary design at Sotheby's in London May 8-15.

"He is to my mind the finest and most original of the Indian dress and accessory designers. He doesn't look to the west for his inspiration but rather the colourful low life of India - gypsies, the desert, Bollywood," Blackburn said in a press statement.

"His work is very Indian but in a way that in the west we understand and appreciate and value," added Blackburn.

The exhibition is curated by Blackburn and designed by Tricia Guild of Designers Guild.

Blackburn feels it's wonderful that the new generation of designers is trying to revive the old crafts while maintaining a contemporary feel in the clothes.

"I visited and travelled extensively in India for many years and am particularly interested in crafts such as weaving, tie-dying, embroidery, enamelling, paper and so on... It is sad that most of the skills and craft traditions we associate and value in India are dying out and not being passed on to the next generation who prefer to go to the cities.

"Much of the work is now mass-produced and poor. But there is a new generation of designers who are adapting these traditional skills and using them for well-designed contemporary work. This is what interests me," added Blackburn.

But Sabyasachi is special.

"His workmanship is exquisite - all handmade - embroidery, beading. He has the finest aesthetic and stays true to his Indian roots. I have followed his progress since he first began designing and am absolutely thrilled he has agreed to exhibit in 'Inspired by India'," she said.

Mukherjee, who regularly designs for the who's who of the country, and also dressed international talk show queen Oprah Winfrey on her India visit, is ecstatic about the news.

"I'm feeling happy that I am being recognised for being Indian, primarily for being myself. I have always said that the only way to become global is to have a local soul. And I am really happy that this is being validated time and again in my career," he said.

Sushant Singh Rajput fans start a petition to get his wax statue at ...

'Billions' Renewed For Season 6
19 minutes ago

Sneha Jain of 'Saath Nibhana Saathiya 2' Sacrifices Her ...
36 minutes ago