With the entry of Mika in Sony's Iss Jungle Se Mujhe Bachao, have you all been wondering what will happen when Mika and the 'Bad Boy' Akashhdeep are pitted against each other? 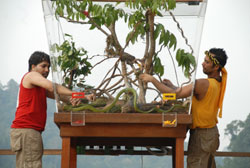 Featured Video
Well, this is what awaits you in tonight's episode. Tonight's food trial on Iss Jungle Se Mujhe Bachao was 'Saap Re Saap' as the name suggests the celebrities were going to encounter frightening snakes. Aakashh from the yellow team and Mika from the red team were nominated for the task.

The task was as follows: A huge glass container was filled with a branch of tree in which around 10 different kinds of ferocious snakes were crawling all over. The glass container had 4 round openings, Aakashh & Mika were told to put their hands inside these openings and collect stars in between all these snakes. There were small containers inside which also had stars, so they had to open them as well. All this had to be done without taking their hand off the glass bowl. The time limit was set at 15 minutes. Bad boy Akashh was maha active; he completed the task before time... while our Mika paaji (who on any other occasion is as ferocious as a lion) was very scared and kept holding back. His performance was poor and he collected about 4 -5 stars, while Aakashh was the winner with all 10 stars.

+ 3
13 years ago Haha. I just saw a glimpse of the show yesterday and oh boy! Mika! LMAO! haha. There will be lots of controversies and ego fights between Mika and Akash/Chetan/Mona