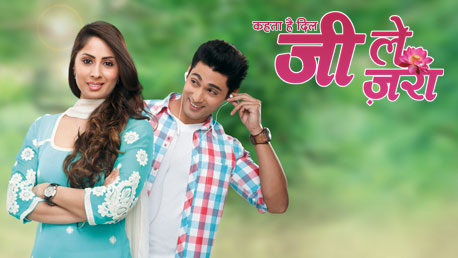 Ankita and Dhruv have known each other since years and are quite close to each other. But this closeness will soon create problem in Dhruv's life, his beloved Saanchi (Sangeeta Ghosh) will get really jealous by Ankita- Dhruv's long friendship.

In the car Ankita keeps on talking about Dhruv and her's childhood stories which makes Saanchi uncomfortable. Dhruv tries to change Saanchi's mood by taking her for a candlight dinner but Saanchi walks out from there too.

Well it seems Dhruv is soon going to have a tuff time in managing two ladies in his life.

divra4 6 years ago really love this show. amazing chemistry between sangeeta and ruslan.

-Serene.Rose- 6 years ago dv darling, tel ur dear friend not to get too chipku or u vl face sachi's, mine n all forum wasis wrath.
Saruv 4evr. Jlz rocks

sabreen_06 6 years ago Wonderful epi today dv stole the show
ruslaan great acting by u...ur expresions were woww..love u keep up the good work
love saruv together they r best

Shamsaaa 6 years ago waiting for the track to get finish asap i wanna SaRuv together only em !&lt;3

Eksie 6 years ago It all happened in yesterday's episode! Nevertheless... we know DV has his heart and mind in the right place. He will know how to strike the perfect balance! There is another woman he has to manage too... his MOM, when she finds out about his love for Saanchi!! :P

exclusive
Exclusive Barun Sobti on being away from TV: My problem is the ...
25 minutes ago

exclusive
Exclusive Jaan Kumar Sanu on keeping up with Bigg Boss 13, looking up ...
42 minutes ago

Subuhii Joshii loses weight all by herself
49 minutes ago