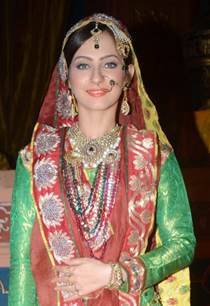 While Salman Khan has been at the receiving end of a lot of fanfare over the years, an incident couple of days ago had him completely speechless and grinning. The dabangg Khan was shooting for his upcoming movie in Karjat very close to the sets of Zee TV's historical drama - Jodha Akbar.  Seeing the actor, getting out of his vanity van, Lavina Tandon ( who plays Rukayya Begum of Jodha Akbar) immediately sprinted to meet the star.

Being the chivalrous man he is,  Salman spent a good amount of time chatting up with the beautiful lady, talking about his upcoming film and her show Jodha Akbar'. While Lavina was on cloud nine on meeting Salman Khan, Salman was stunned to see Lavina suddenly race from her set next door to meet him. If sources are to be believed, the two did not just chat up, but also ended up clicking selfies. Fulfilling her dream of meeting the superstar, Lavina's happiness knew no bounds after having a word with him. We asked Lavina for her pictures with Salman but she said, "No! This is my personal, private, prized possession ... I don't want this for publicity!"

The visual of a much adorned Mughal era royalty clicking a selfie with a contemporary superstar was striking and had the unit members of Salman's film chuckling! Do we get to see Lavina in any of Salman's forthcoming films? All the best, Rukayya!

--Janvie-- 6 years ago Love you as Ruqaiya Lavina Tandon.!!

Marathi_Mulgi 6 years ago wow she is very much lucky to get her fav. meeting n chatting n snap with him

smile.sara 6 years ago LOVE U LAVINA tendon::: ...u and rajat tokas rock..!!! ... u r so sweet and sensitive as ruqayya ...love your attitude of queens... queens should not look girl next door...
the chemistry of rajat and lavina is too awesome ... love u guys ...muahhh..

Pals2411 6 years ago Paridhi Sharma and Rajat Tokas rock in Jodha Akbar...And so does Lavina Tandon as Ruqaiya begum!...Keep up the good work guys!!

Rajat_Fanatic 6 years ago you rock Lavina Tandon!!!
You and Rajat together make an awesome pair...love RuqLal scenes alot!!!!

RAJAT and YOU are the STARS of the show!!!!
alongwith Ashwini ans Chetan!
You guys rock!
keep going!!