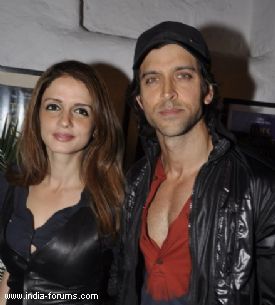 Sussanne K Roshan Saturday denied a media reports saying her divorce from Hindi movie star Hrithik Roshan is a Rs.100 crore settlement and said that its unethical to publish such false news.

"I was deeply disappointed when I read today's article titled 'Sussanne and Hrithik Roshan divorce: Rs. 100 crore settlement? There is no element of truth in the news and it is entirely speculative," she said in a statement.

"It is unethical to publish false news and speculate on the private relationships of individuals," she added.

Hrithik announced Sussanne's decision to end their marriage via an official statement Dec 13. Both dated for four years before finally tying the knot Dec 20, 2000.

Sussanne says that they still have respect for each other and their focus remains the kids.

"Hrithik and I have always had the deepest respect for one and another. Our primary focus has and will continue to be our two children. I would yet again like to appeal that we are granted our privacy at this critical juncture in our lives," she said.