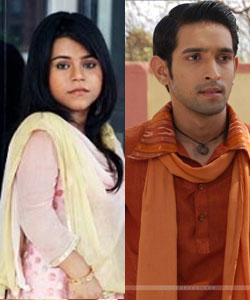 Imagine stores in a high voltage and intense drama in the show Baba Aiso Varr Dhundo produced by Raakesh Paswan and Nikhil Sinha.

The revelation of Prakash (Shobhit Attray) has made Murli's (Vikrant Massey) parents realise how dutiful their daughter in law, Bharti (Juhi Aslam), is, which have brought them as well as Bharti's parents closer. And in the coming episodes, Murli and both the families will succeed in finding Bharti and Amit (Jaan) who have been kidnapped by Prakash.

Our source states "In the coming episodes Murli and the whole family will be seen running helter- skelter in search of Bharti after which they finally succeed in tracking Prakash and his fake father. There will be a huge chase sequence following this, where Murli and the families ultimately end up trapping them at a railway station."

"In the platform a major twist happens when Prakash fires a gun shot at Murli in the tussle and Roopesh takes it for him" adds the source.

We hear that the creative team has not yet taken a final call on the culmination of this major fight sequence. However the buzz is that, Roopesh might breathe his last. And with him getting back the trust he had in Murli and understanding the good soul he has, he will hand over the responsibility of his daughter to Murli as he breathes his last.

Will this major high point bring Murli and Bharti closer?

Catch all the gripping twists and turns in Baba Aiso Var Dhundo on Imagine.

9 years ago thank for the information dear

9 years ago OMG...in a way its gud...but VERY sad!!
why does always bharti has to suffer the most?

this twist will juss be so shocking...it'll be more painful for her to lose her dad than to take the bullet herself!

peehu.vg 9 years ago whatever .... this cud have been such a good show ... problems of a short gurl but .. have just spoilt it ... dnt care anymore

9 years ago why are the creatives in such a hurry to end rupesh's character??? i don't like this idea of rupesh getting killed & handing bharti's hand in murli's hand. if i don't want sudha to be the one who dies then i definitely don't want to see rupesh die too. what's the need to show someone dead... & if it is necessary then why not eliminate RA?

Poor Sudha, poor Amit, and more than that, poor Murli!!!

I hope for one Murli and Bharti become closer even if its just as friends for now, its about Murli see Bharti as a human and so on

11 years ago thanks!!! I want to watch this movie soo bad..I just hope its as good as the promos show it to be :)