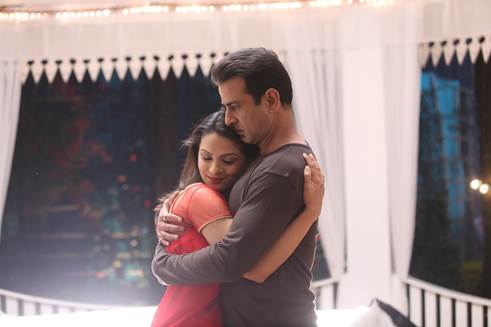 Kuch Kuch Hota Hai is one of the cult romantic movies of all time! The rain sequence between Shah Rukh Khan and Kajol has been etched in audience's memory as one of the best scenes ever. Now, television's new couple Ronit Roy and Pallavi Kulkarni who play Neil and Ragini in Sony Entertainment Television's Itna Karo Na Mujhe Pyar are all set to recreate the same magic on the small screen as they dance to the tune "Suraj hua Madham."

Till now, audience has mostly seen Neil and Ragini arguing and fighting in the show. Though, they do care for each other, the anger and hurt still persists. However, the upcoming episodes will see them in a whole new avatar as they share a romantic moment in the rain similar to that of Kuch Kuch Hota Hai. Ronit dressed in black and Pallavi looking beautiful in a red saree will showcase their sizzling chemistry as they enact the romantic scene. They will dance and hug each other as they finally profess their love. The scene is romantic and extremely sensuous.

Talking about the same Pallavi says, "Yes, we have recreated the rain scene from Kuch Kuch Hota Hai. Audience will see Neil and Ragini dancing romantically on the song Suraj Hua Madhdham. Both, Ronit and me had a great time shooting for the sequence. It was such a pleasant change from the kind of scenes we have shot till now. Our look is also very different. I am sure our fans will love it."

lubnakd 6 years ago Waiting eagerly for this scenes. Ronit Roy and Pallavi Rocks

Ronit Roy u rock all the for this episode rock it!

+ 2
6 years ago Ronit Roy u rock all the for this episode rock it!!

nnisha8rr 6 years ago super duper excited for this romantic performance of our hottest Neil-Ragini...#IKNMP Rocks