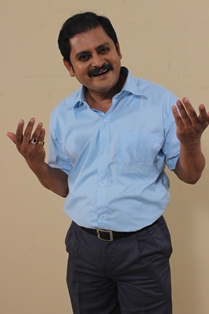 SAB TV's Lapataganj Ek Baar Phir is a lively TV series which shows daily life happenings in a small village and the funny happenings amongst the different families that reside in it.
Rohitashv Gaur plays the character of Mukundilal Sughandhilal Gupta, an upright government clerk with a refined set of moral values. Mukundi is an intelligent person and is always helpful towards his neighbors and other village folks. In the on-going track, Mukundi wants all the people of Lapataganj to be responsible citizens and cast their vote for a better government and better future of the country. He appeals to the people to consider Election Day as not a holiday to laze around but a day to decide and contribute in the country's future.

Rohitashv said, "With the on-going elections in the country, the recent track will see me convincing people to cast their votes and be model citizens. Also on the personal front, I feel each and every citizen of our country should vote. It is not only a social responsibility but also an authority vested in us which empowers us to change the face of our nation. Even one vote can make a huge difference. The women of our country should also come forward in huge numbers and contribute in this endeavor."