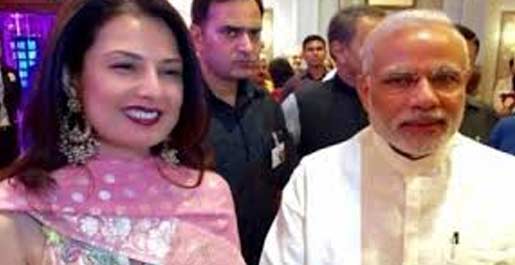 "Had the opportunity to meet @Narendramodi_PM this evening; as enigmatic in person - he is a true star!!!," Beri tweeted along with a photograph on Thursday.

Dressed in a pink suit with floral work on it, Beri was all smiles while posing with Modi, who has been lauded by many designers for his sartorial choice.

The capital-based fashion mogul is not only a big name in the country, but has also been honoured on international lands.

She has been conferred the Chevalier dans l'Ordre des Arts et des Lettres (Knight of the Order of Arts and Letters), one of the highest civilian awards by the French government. She was also bestowed the 'Order of Civil Merit', a civilian award by the Spanish government.

Beri even has an impressive clientele. Some of the notable international personalities for whom Beri has designed wardrobes are former US president Bill Clinton, Prince Charles, actresses Nicole Kidman and Andie MacDowell.