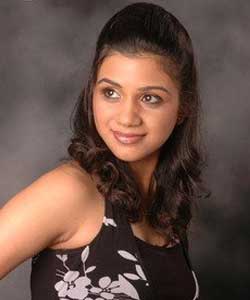 Riddhi Nayak who was last seen on Imagine's Bandini as Toral will soon take a grand step in Colors' Laagi Tujhse Lagan as Indu.

"Riddhi Nayak will play the character of Indu a very simple and positive girl who stays in a basti and eventually will meet Aai Saheb who is in search of her child. It will be revealed that Indu is only Aai Saheb's (Swati Chitnis) daughter who got exchanged and Kalavathi is not her real daughter," reveals our source.

We contacted Riddhi who confirmed the news as she stated, "Yes I am playing the character of Indu who is very noble and optimistic. Its a nice character to play but I cant reveal much now."

We hope this upcoming track manages to garner some eyes from the viewers...

Sorry no words , but this is super duper funny ...Kala is not AS's Daughter . So will we there now be space for Kissu's Love story with this new entry ...

These guys will not give up , even if they r in minus ...they will still drag it to their grave and beyond ..

Bhai Cvs , the more u stretch an elastic the more it will pain and hurt , when it snaps back ... In short..the more u drag the show the more u will lose . U have already lost ur trps by getting one character cld Diggu . Now u bring another one

rayjst 8 years ago Why!!!!!!!!!!! Colors, Why are you hell bent on destroying the very essence of the original so much??? Why do you want to air brush off the character flaws that made the original beautiful???

Kala is sooo Evilll, so there is no way she is blood related to mahaan Aai Sahab nd Datta right, God Forbid. I swear, Colors nd mahaan Creative-ji, wth is this???

MelodiousDreams 8 years ago Only one word has been applicable for this show for since March 28th: Pathetic.

nikita_88 8 years ago Good luck Riddhi...you were great in Bandini

Missbantu 8 years ago I had no idea that this show was still going on, best of luck to them. It has been ages since i watched it.

Keva 8 years ago The producers and the channel just changed the entire story and this is the second time they are doing it. The show was about original dutta and naku and Kala's revenge and now it turns out Kala was taking revenge for no reason at all. LOL It was bad without Mishal and now it is pathetic that even the character of Kala is useless.

Btw Rajini Nair nobody is watching it coz it is the worst show ever on Indian television.