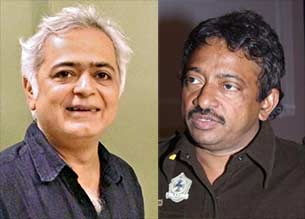 At Hansal Mehta's birthday bash last week, many of Ram Gopal Varma's associates met and discussed that RGV as he is popularly called is the "fountainhead for all his new-age filmmakers" and that he needs to get back in form.

"He's just being stubborn. All he needs to do is listen to people who care for his cinema, correct his mistakes and he'll be back in form," said Mehta, at whose 46th birthday bash, many of Varma's old associates met.

It was a no-media bash at a restaurant where Mehta invited all his technicians, writers and actors.

Talking about it, Mehta said: "I felt a bit like Guru Dutt. Except that I didn't have to sing 'Bichhde sabhi baari-baari'. They were all there, all my colleagues and associates from my first two directorial ventures 'Jayate' and 'Dil Pe Mat Le Yaar' to the latest 'Shahid' and now 'Citylights'."

Among the crowd that gathered to raise a toast to Mehta were many technicians whom Varma had introduced.

Mehta said: "My editor Apoorva Asrani, for example, started his career with Ramu's 'Satya'. He has edited many of my films, including 'Citylights'. We all got down to talking about Ramu. He is the fountainhead for all his new-age filmmakers. The new face of Hindi cinema happened because of Ramu, and we're all his disciples."

Now they have all vowed to bring Varma back to Mumbai from Hyderabad.

"It's time for Ramu to re-invent himself. All of us who believe in his talent will stand by him. He has to be get back into form," he said.