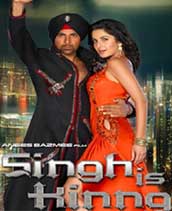 Featured Video
Singh Is Kinng, the most keenly awaited romantic comedy of 2008, is directed by Anees Bazmee and produced by Vipul Amrutlal Shah. The story revolves around the life of Happy Singh (Akshay Kumar), a gang of crooks transformed by him and his selfless love for a pretty girl...

Lakhan Singh aka Lucky (Sonu Sood), belonging to a small village in Punjab, is an underworld Don in Australia accompanied by his associates Mika (Javed Jaffrey), Julie (Neha Dhupia), Pankaj Udhas (Yashpal Sharma), Guru ji (Kamal Chopra) and Raftaar (Sudhanshu Pande). This wasn't the way Lakhan hoped his life would turn out when he arrived in Australia. But now as he dodges assassins and runs his empire, Lakhan aka Lucky has accepted that there is now no turning back from this violent way of life... until Happy arrives! 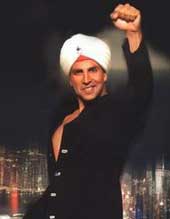 Happy Singh (Akshay Kumar), from the same small village in Punjab, is someone more notorious than Lucky. He is truly a King at heart - brave, compassionate, noble and helpful. But he's an equally flawed human - gullible, foolhardy and accident prone. Circumstances often overwhelm him and his efforts to do good almost always have the opposite effect. In fact, each time he sets out to help somebody, his entire village shudders at the prospect of impending disaster, which has resulted in a number of hilariously disastrous situations. Out of desperation, villagers decide to send him on a long trip which will keep him out of the village for a while, to bring Lucky back to Punjab, as his despicable deeds were maligning their image in Australia.

The high point of Happy's journey is his chance meeting with Sonia (Katrina Kaif) with whom he falls in love, but upon reaching his destination, things take a precarious turn as he runs into a series of comic misadventures, leaving him penniless. He is fortunate to find warmth and affection in an elderly lady, Rose Lady (Kirron Kher) who helps him meet Lucky. 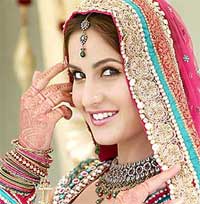 Sonia (Katrina Kaif), a chirpy, fun-loving student of law, loses her cool only when confronted by criminals. But nothing prepares her for the twist fate has in store for her when she finds herself surrounded by some of the most dangerous gangsters in Australia.

Rangeela (Om Puri), Happy's best friend and also his worst enemy, is an aging bachelor who finds that his friendship with the village's most notorious do-gooder has cost him marriage alliances; a reluctant Rangeela is forced to accompany Happy on a mission that was his brainchild to get rid of his friend for good.


The series of chaos, shocks and comic misunderstandings that ensue eventually result in redemption and an accidental wedding!

Akshay Kumar takes rapid strides with SINGH IS KINNG. Though we have seen him several times in comic roles, but this time he is at his best and really brings smiles to audiences faces with his comical misadventures.


Karina is as usual looking gorgeous and enacts her role very confidently and does full justice to her character. Superb acting by all the actors, makes the movie really worth watching on the big screen.

On a whole, Singh Is Kinng marks superstar Akshay Kumar's re-entry into the action-comedy minefield. With plenty of romance, glamor, laugh-aloud moments and chartbursting music, it promises to be one of the most appealing and entertaining motion pictures of 2008.

Bolly Curry Rating: 4 1/2 Chillies Out Of Five, Excellent Entertainer and must watch in theaters!