BollyCurry is back with its next edition of Retro Review of the Week! This time, the movie in question is the one with some really liked characters and actors - the movie of it's time: Main Hoon Na.

What happens when an army officer goes undercover for the sake of his country, while harboring a hidden personal 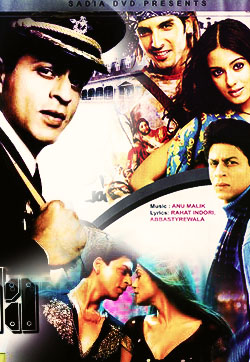 motive? What happens when he ends up in a college full of teens, half his age, not as a professor but as a student? Yes, it is just as intriguing as it sounds - a complete mixture of two drastically opposite environments that this film does a very well job at portraying. The adventures Ram (Shah Rukh Khan) comes across while protecting Sanjana (Amrita Rao), while looking for his lost brother, Lucky aka Laxshman (Zayed Khan), foiling the country's enemy Raghavan's (Sunil Shetty) plans all worked in favor of the film, making it a super hit! The plus factor of this film is that of his romantic equation with the hot and sizzling chemistry professor, Chandni (Sushmita Sen).

When going in depth of what worked and what didn't, all one finds are positives! At each turn is a twist, followed by a heroic act of Major Ram. The movie has it's complete share of everything: action, drama, youthfulness, betrayal, romance, singing, dancing and comedy. The beautiful relationships portrayed amongst a backdrop of patriotism include that of a mother-son relationship between Ram and Madhu (Kirron Kher), the friendship between Ram and Lakshman (the irony!) and Ram and Sanjana. The sizzling romance between Ram and Chandni and the brewing teenage love between Lucky and Sanjana add a steamy hot and innocently cute effect respectively.

Letting the music flow into us, this Bollywood musical has some marvelous pieces at each turn such as 'Main Hoon Na' sung by ace singer Sonu Niigam and the talented Shreya Goshal - for which Nigam received an MTV Immies Best Male Singer Award and Star Screen Awards for Best Male Playback Singer. Other soulful tracks include 'Tumse Milke,' 'Tumhe Jo Maine Dekha,' 'Gori Gori,' and 'Chale Jaise Hawaein'. The music of this film was composed by the famous Anu Malik, earning him his second Best Music Director Award. It wouldn't be false to claim and conclude that these pieces can still be listened to and sung at various celebrations.

The movie went on to receive largely positive reviews from most of the critics, who appreciated the novel way in which a normal masaledaar Bollywood script was executed. It also won the hearts of the audience, which is what catapulted its revenue. Main Hoon Na then went on to become the second highest grossing Bollwood movie of 2004 behind Veer Zaara, and Box Office India declared the film to be a hit within India, and a blockbuster overseas! For first time producers Shah Rukh Khan and Gauri Khan's Red Chillies Productions, this was surely a boost!

Looking at the movie as a whole, it was indeed a complete package with its equal share of heart stopping action with it's army backdrop, and the light-hearted fun and romance within the college environment. Indeed, the movie justifies its title - a message that there is a savior amongst everyone to protect them of all harms. This movie can be called nothing short of perfection.

Did You Know?
Needless to conclude, Main Hoon Na is one of Bollywood's classic movies, and one that can be watched repeatedly without getting bored. BollyCurry hopes the legacy of this film lives on for at least another decade at hand!
Writer: Khushi P.
Editors: Ritchelle C. and Gunia M.
Graphics: Komal P.
Do you have a suggestion or comment for BollyCurry? Drop us a PM at  BC_Dropbox today.