View Profile
BollyCurry ransacked its bag, only to reveal a blockbuster hit for this week's retro review - Beta. The movie portrays the journey of a son who loves his stepmother to the extent that he almost loses his life. Love, betrayal, jealousy, manipulation - all of these crafted the movie for what it was.

Directed by Indra Kumar, the movie boasted of a critically acclaimed star-cast consisting of the veteran actress and 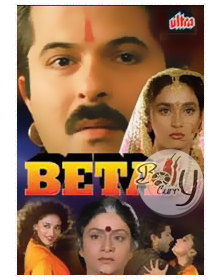 
The film revolves around a young boy Raju (Anil Kapoor), who loses his mother at a very young age. His craving for love and care leads his father to marry and bring home Laxmi (Aruna Irani), who acts as a mother to Raju. Unbeknownst to Raju and his father, Laxmi had her own reasons for the marriage - the greed of wealth. Using her influence on Raju, Laxmi keeps him uneducated in contrast to the other son she bore. A devoted Raju blindly follows his stepmother's instructions until the day he falls in love and weds the educated and street smart Saraswati (Madhuri Dixit). Over time, Saraswati discovers the conspiracies set against Raju by his own stepmother, and brings Laxmi's truth out in front of him. Raju, devastated by the truth while on his deathbed, signs off all his property to his stepmother, and is about to leave with his father and wife. By this time, however, Laxmi has come to understand her erreoneous ways and begs for forgiveness. The movie ends on a happy note as the family is united.

Despite the film having a rather tried and tested theme of familial discord, the actors' performances were powerful enough for Kapoor and Dixit to win the Filmfare Award for Best Actor and Actress respectively, while Aruna Irani won the Filmfare for Best Supporting Actress. The music of the film was also critically acclaimed, and famed singer Anuradha Paudwal won the Best Female Singer award for the extremely popular song "Dhak Dhak Karne Laga".

Did You Know?
We, at BollyCurry, definitely think the movie justifies its status of a blockbuster in every sense. For all the Madhuri fans out there, if you haven't already been blown away by her acting prowess in the recent film Dedh Ishqiya, beware of the Diva's magic in her upcoming flick, Gulaab Gang. Until next time, let us know what you think of the aforementioned movie, and if you have any more interesting facts, feel free to drop a comment below!