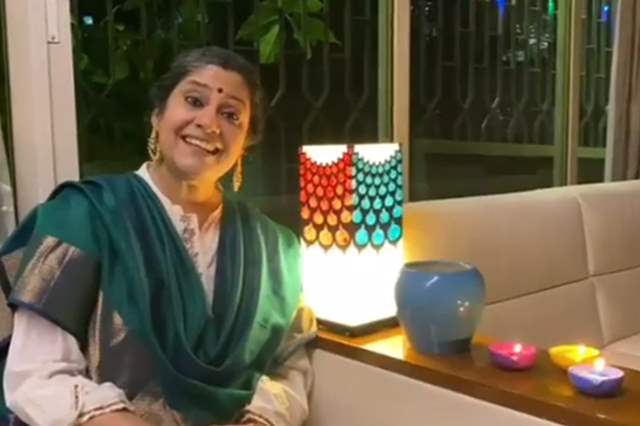 Actor Renuka Shahane has been on the tube for a long time now and while she continues to be best remembered for her role in Hum Aapke Hain Kaun?, she has been very relevant lately with her opinions on Twitter on several platforms.

Now, after all these years, she returns to direction with upcoming film, Tribhanga that will be arriving on Netflix. Shahane made her directorial debut with a film called Rita back in 2009.

The film stars Mithila Palkar, Kajol and Tanvi Azmi playing three generations. Shahane says she had not envisioned it would take her so long to be back as director, and she shared that there are many factors that contributed to the delay.

"It was the script that took the longest where 'Tribhanga' is concerned. I can't do too many things at one time. (When it comes to) Acting, I can do two or three roles at one time, but for me direction is a very immersive process," Renuka, who has mostly featured in Hindi and Marathi films as well as shows, told IANS.

"I am also a full-time mom by choice. That balance made this process a bit long. I didn't know that after my first film, it would take me so long to direct again. But then things happened. I felt that whatever I put out, I should be happy with it on the script level first. Scripting itself took me about six years. Then I pitched it and put it across producers. It's a long process to reach the right people also. I am just keeping my fingers crossed. I hope the next one doesn't take so long," added Renuka.

January 15 happens to be an important date for her. Tribhanga will release on that day and her web series, Starting Troubles, drops the same day. As much as she is excited about the audience responses to her directorial, she is also looking forward to the release of Starting Troubles, which has her playing a doctor.

Talking about her character Dr Kavita Gowda on the show, she shared: "She can't be faulted. She is particular about every single thing that goes into the profession. It is a matter of life and death. The medical profession...you are not doing anything casually. You are dealing with people's lives so, she a senior who doesn't like it when students take things lightly and don't know their job. She also recognises a person who wants to do something different, who want to innovate."

It is a medical comedy drama that revolves around Dr. Jagdish Chaturvedi, a person whose heart lies in the world of acting, though he ends up becoming a doctor. It is based on Dr. Chaturvedi's autobiography "Inventing Medical Devices".

"I have always liked medical dramas in the West because you get what happens around the medical profession. There's a certain authenticity about it. At the same time, you are involved with the characters and whatever drama is unfolding. But in India, I feel the drama takes over, and the medical part of it somehow suffers. So where 'Starting Troubles' is concerned, that's not the case. It's by a person from the medical profession. It's basically coming from whatever life he has lived. It is such a relatable and real experience. It also has a fair share of drama and is really funny," added Renuka.

Once these projects premiere, she is going to take a break.

"I will take one month break after January 15th. Then I will go back to writing," said the actress, who had a busy lockdown as she spent most of her time in the post-production of "Tribhanga".

Though she didn't share what will be the subject of her next directorial, it seems like she is inclined towards telling stories revolving around women.

"I understand women better. I just feel that we should celebrate different kinds of women on screen, which we don't see. How many roles are written for women over 30? How many roles are written for women that are not romantic. It should be something that goes beyond romance, something that delves into their likes, dislikes, the person they are, profession they are in, that is the kind of thing I would like to see on screen and that's why I have written films on those kind of women," said the actress-filmmaker.

"I don't think enough is shown in terms of range of women in our society. There are so many women in rural and urban India, of shapes, sizes, working and housewives. We should be representative of that," she signed off.

Mithila Palkar spills the beans on playing Masha in Tribhanga

‘From parent’s break up to being a working mother’, Kajol says her ...

smallwonder a day ago I love her... Such a tremendous personality...