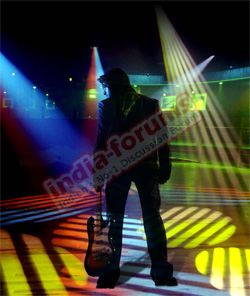 Mumbai, June 13 (IANS) After making inroads into Hollywood and buying about 250 movie screen chains in 28 cities across the US, Reliance BIG Entertainment (RBE) has now acquired theatrical and other rights of a Bollywood film at a whopping price.

Recently, RBE bought the world theatrical, satellite and Internet rights of T. Series' much talked about film 'Karzzz' for Rs.3.5 billion (Rs.35 crore). Apparently, this is the highest price a movie starring composer-turned-actor Himesh Reshammiya has got so far.

Of course, T. Series mounted the movie at a lavish scale and reportedly spent Rs.2.8 billion (Rs.28 crore) on its production.

'Karzzz' is the first of the three-movie deal Reshammiya had recently signed with the company for an undisclosed amount.

Apart from the Rs.3.5 billion it has already received from RBE by selling the remaining rights of the movie, including from music sales, T. Series is expected to earn at least another Rs.2.5 billion or so.

'Karzzz' is a re-make of Subhash Ghai's hit movie of the same name which was released in the early 1980s. Indra Kumar, who had himself given a number of hits in the late eighties, has directed 'Karzzz' and his daughter, Shweta Kumar, makes her debut in it, playing the female lead opposite Reshammiya.