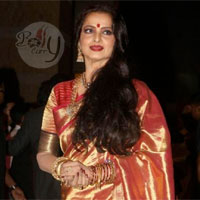 Academy (IIFA) awards to be held in Singapore next month.

"I am extremely humbled to be appreciated and considered for my contributions to the film fraternity. It has been a long journey and hopefully my passion and love for cinema will continue to reach out to all my fans. I am especially happy to be honoured at a time when the industry celebrates a centenary of Indian films," Rekha said in a statement.

Daughter of South Indian film stars Gemini Ganesan and Pushpavalli, Rekha made her acting debut with Hindi film "Sawan Bhadon" in 1970, which was followed by a string of hits like "Namak Haram", "Muqaddar Ka Sikandar", "Khubsoorat", "Silsila" and "Umrao Jaan".

Recenlty she was sworn-in as a Rajya Sabha member.