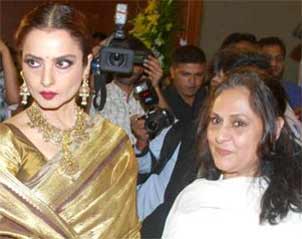 It was a rare moment for Bollywood buffs and industry insiders - veteran actors Rekha and Jaya Bachchan were caught greeting each other warmly at an awards function where megastar Amitabh Bachchan was honoured with a lifetime achievement award.

At the Life OK Screen Awards held here Tuesday, Rekha was seated and enjoying the show when the Bachchan trio of Amitabh, Jaya and Abhishek came in midway through the event.

While Abhishek was busy giving out media bytes on the red carpet to the electronic media, Jaya walked in whereas Amitabh was talking to a guest.

Jaya came forward and saw Rekha but instead of walking away or avoiding her the duo exchanged a warm smile, said a source.

Rekha got up and greeted Jaya who also clasped the former's hand amicably.

Both the screen icons looked resplendent in gorgeous pink saris and sparkling jewels at the event held at the MMRDA grounds here.

At one time "Big B" and Rekha shared a roaring chemistry on and off the screen. Their last Bollywood project together was Yash Chopra's 1981 entertainer "Silsila" which also starred Jaya.

But since then, the duo who acted in films like "Namak Haraam", "Do Anjaane", "Muqaddar Ka Sikandar", "Mr. Natwarlal", "Suhaag (1979)" and "Khoon Pasina", have not worked together.

At the 20th edition of the Screen Awards, Amitabh was recognised for his over four decades of contribution to the world of Hindi cinema.

Filmmaker Vidhu Vinod Chopra and actor-politician Shatrughan Sinha handed over the special award to the 71-year-old.

From Sid, Bunny to Ved, Barfi: Life Lessons that Ranbir ...
16 minutes ago

exclusive
Exclusive Bigg Boss 14: Sakshi Chopra decides to give the show a miss ...
53 minutes ago