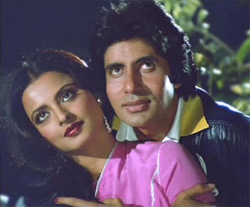 The news stating that the timeless Amitabh-Rekha pair was likely to come together again had been published in a national daily. The report, which had television channels going berserk, now turns out to be totally unfounded.

'I've no clue what or which film you're talking about. This is utter rubbish,' Amitabh told IANS, putting an end to all the speculation about the screen-pair coming together.

In fact, according to well informed sources, it's not just unikely but impossible that the pair, who made us swoon in innumerable films from 'Do Anjaane' to 'Silsila' will ever come together again.

Years after 'Silsila', the Amitabh-Rekha pair came together in unexpected ways when Rekha dubbed for both the leading ladies, Soundarya and Jaya Sudha, in the Amitabh starrer 'Surayvansham'.