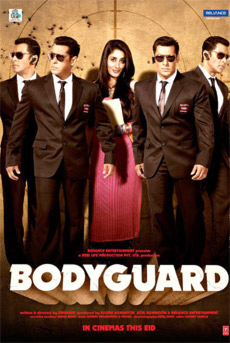 New Delhi, Sep 1 The festival of Eid has once again proved to be lucky for Bollywood superstar Salman Khan whose new release 'Bodyguard' has earned a record Rs.22 crore net as first day collections -- surpassing blockbusters 'Dabangg' and '3 Idiots'.

The action-packed drama, in which Salman has teamed up with Kareena Kapoor, was released on Eid-ul-Fitr Wednesday. His 'Wanted' and 'Dabangg' too released on Eid in 2009 and 2010, respectively.

'The response to the film has been amazing. We had estimated the collection to be Rs.20 crore on the first day and it went on to be Rs 21.5-22 crore net, which are phenomenal figures for the first day,' Priti Shahani, chief strategy and marketing officer, Reliance Entertainment, told IANS.

'Salman, no doubt, is the biggest driving factor as he has a huge fan following. A good release date is extremely crucial on the theatrical side and Salman and Eid are indeed a lethal combo,' she added.

Made at an approximate budget of Rs.60 crore, the film released in India with 2,600 prints and 325 prints overseas. Shahani said they haven't yet got the figures for overseas collection. 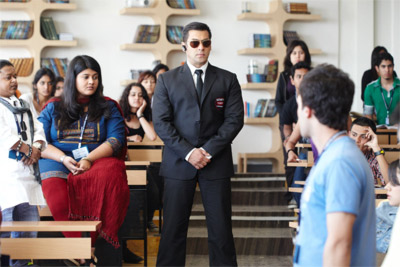 A Hindi-remake of the Malayalam film of the same name, 'Bodyguard' has been directed by Siddique and co-produced by Salman's brother-in-law Atul Agnihotri and Reliance Entertainment.

Shahani predicts that the film will cross the Rs.100-crore mark in the very first week.

'Looking at the unprecedented response to the film, 'Bodyguard' is likely to cross the Rs.100-crore mark in its first week,' she said.

With an extended weekend, multiplex owners are hoping to make good business.

'The opening has been nice, the occupancy has gone up to 80 percent. People are liking the film. We are hoping for a good weekend and expect the occupancy to go up to 100 percent,' said Munish, managing director (marketing) of Satyam Cineplex.

Yogesh Raizada, of Waves Cinemas calls the film a treat for Salman fans.

'It's a complete Salman Khan with lots of action and some comedy. People are enjoying the film. On the first day, the occupancy was around 80 to 90 percent in the suburbs and in the NCR region. We hope an equally good response over the weekend,' he said.