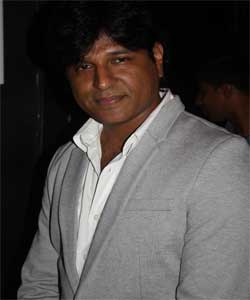 Producer  Nikhil Sinha started his career as a DOP and did a series of successful shows and then graduated to becoming both- Director and DOP and captained another long series of Televisions Shows, viz. Yeh Pyaar Na Hoga Kam (Colors),Ek Veer Stree ki Kahaani Jhansi Ki Rani (Zee TV), Jai Shri Krishna (Colors),Prithviraj Chauhan (Star Plus). He co-produced Baba Aiso Varr Dhundo with Raakesh Paswan and then became independent producer with Devon Ke Dev. Mahadev on Life OK which is being talked about for high production values as well as unique content.

What is the response of the audience to your show 'Devon Mein Dev Mahadev' on Life OK?
So far, the response has been very good, I am overwhelmed to be honest. In my career I have worked in many shows but Mahadev certainly got the maximum attention from masses and classes both of which is very inspiring. People say that Mahadev is not a typically mythological show and that is why they are liking it all the more. I feel very happy about this.


Why did you pick you mythology show on 'Mahadev'?
I always felt this that Lord Shiva is a very mysterious character and people only associate a lot of anger to his personality. Actually, that is not the case. There are many other aspects to him which few of us know. I wanted to come up with those untold stories on him. Also Lord Shiva is someone who has loads of attitudes and pride and at the same time he is so calm. How can a warrior be a bairaagi, dancer and singer at the same time? He is a multifaceted personality. These were some of the key reasons why I came up with a show on him. And also if you see there are temples on Vishnu, Narayana, lord Rama as there are many incarnations, but there is none for Lord Shiva.


How did you finalize Mohit Raina as Mahadev ?
When I was conceptualising this show I had certain parameters in my mind. I had a certain sketch of Shiva. Mohit had auditioned for some other character and he looks very different in real life; he has a typical Kasmiri look with a broad nose and very sharp features and strong jawline. I thought this was just apt for Mahadev. I have also convinced many people about Mohit as I had the right vibes from him and knew from the beginning that he is the lord Shiva for me.


What prompted you to cast Mouni Roy as Sati ?
Mouni has this image in the industry and also in the media that she has an attitude and is quite reserved. Sati is someone who is very innocent and at the same time she has an attitude towards her personality which is unique. I had auditioned many girls for this role but when I met Mouni and we were chatting I realized that Mouni has that special characteristics which I am looking for. I am happy that my conviction for Mohit and Mouni has worked for the show.


In the Director Vs Producer tussle, who ends up dominating whom ?
A director is someone who makes money for the producer. It has been more than 14 years for me in the industry. I have turned producer after more than a decade's struggle. This growth has been a natural one for me. I think I enjoy directing than producing! As a cinematographer, I was very strict, but I feel as a director I became more accommodating. The overall journey has been great for me.


What has the role of  'Suhana' been in your life?  Is she truly your better half?
Directing and producing a show simultaneously is a very tough process. You hardly have time for yourself, for your family. Suhana understands everything that and I am very luck for that. Suhana also takes care of certain things like casting and costume which are the main integral part of any show. She has been a great support in my career.


What are the Changing faces of Indian Television?
Most trends are cyclic. In the Eighties, the storyline was very important. Then it became the technology in the Nineties. Now again it is the trend of strong storyline. Like a Bade Acche Laggte Hai for instance. Opportunities are increasing and there is a long way to go.


Why is it that you say 'No' to Reality Television?
No offense against reality shows. It generates loads of money, instant fame and good TRPs, but I am a good storyteller and I prefer working on the fiction genre. I treat that as my genre.


What are your future plans?
Definitely films! That is my ultimate dream as a creative person. But I also believe that for that I need some time, I just can't jump and hop to that. May be a 3 years of time and will be doing my film.

Sanyomg 8 years ago Ya seriously ur choice as mohit and mouni for the leads of dkdm is perfect. They make a good pair n their acting skils are also briliant

aisha2080 8 years ago Two of my favorite shows: DKDM (but please upload the episodes in HD on YT)

bhakti2 8 years ago Thank you for nice interview - reallywant to thank Nikhil for DKDM - love this serial so much. Mohit and Mouni are doing great job.

.Reshama. 8 years ago Thank u Nikhil for the DKDMD tv serial.. i really love the show!! =]

TOTAL-ROMANTIC 8 years ago For a change Tellbuzz has given a sweet article in not so famous teenage crazy person..Nikhil Sinha deserves all the adulation..Great show..great thinking ..The man really knows what he does & he does it from heart..Thats why it reaches our hearts..Thank you Nikhil to have got Mohit & Mouni as a pair in my life..Best pair ever..!!