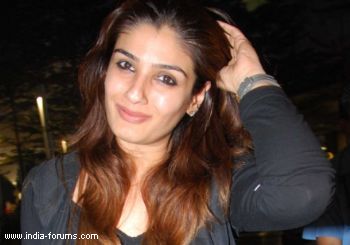 Actress Raveena Tandon says her best Valentine's Day was when her husband Anil Thadani presented her with a romantic evening.

"He had booked a poolside in a hotel that was very beautiful. The whole poolside was booked for us and there was not a single soul. There were red flowers everywhere, there was a band playing and it was just him and me sitting on a beach front. So, I think that was our best memory," said the 37-year-old at an event.

The National Award-winning actress tied the knot with Thadani, a film distributor, in 2004 and says now their kids join them every time they go out.

She is looking forward to this year's Valentine's Day too but says that now it's more of a family affair.

"Now we go for dinner and our kids are along with us. My daughter is busy drawing hearts for us. At every stage of your life, it's a different fun together," said Raveena who was last seen in "Bbuddah...Hoga Terra Baap."

She will soon be seen in "Shovna Seven Nights" opposite Rohit Roy as well as "Gin Liya Aasman" and another untitled film that will go on floors in March.