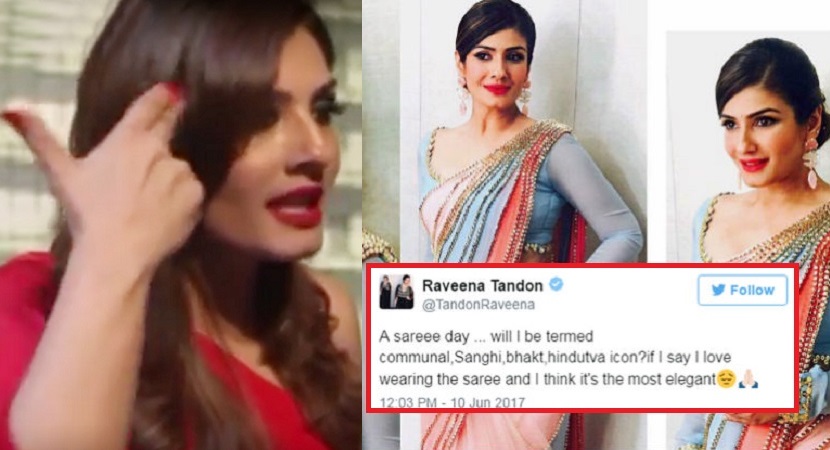 Actress Raveena Tandon on Saturday hit back at Twitter trolls for indicating that she is voicing her opinion to further her political ambitions. She said she is not interested in joining politics.

The actress was being trolled for a post that read: "A sareee day... will I be termed communal, sanghi, bhakt, hindutva icon? If I say I love wearing the saree and I think it's the most elegant."

One Twitter user posted: "Are you trying for a comeback in movie? Or trying to get a Sanghi seat in 2019?"

To which Raveena said: "All those thinking I want to get into politics. I am not interested. Was offered by TMC. Congress, and BJP. Said No."

"The reason that I put a disclaimer for saying I love the saree! Nowadays can be trolled for anything and can be twisted to suit narrative... Last I knew one was in a democracy and could practice your faith without being targeted and called names," she said.

The "Mohra" star added: "Saree is a beautiful elegant Indian garment. My tweet was not to communalise saree. Was my fear of being trolled to say I love anything Indian."

"If it has come across as anything else. I apologise. That was not the intention. Had not thought that it would be misunderstood the way it has."

On the work front, she will soon be seen in Onir's "Shab", which will release on June 30.

Shehnaiyaan 3 years ago Many celebrities post pictures in sarees. Raveena called attention to herself by politicising the same with an unwanted disclaimer.