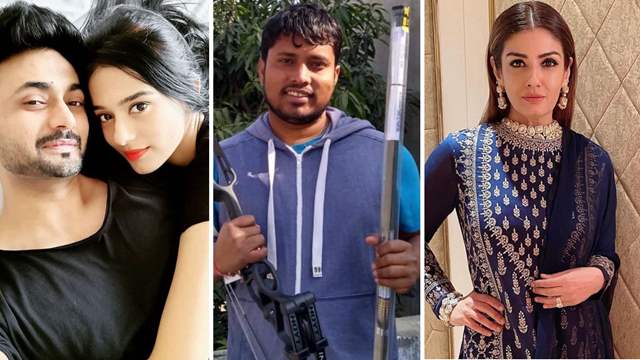 Here's a shot in the arm! Celebrities including Amrita Rao and Raveena Tandon, and fans of Shehnaz Gill and Siddharth Shukla have come forward to raise funds and garner support for a Jaipur-based national level archer named Arjun, who has been in need of the right equipment to pursue his larger dream of representing the country internationally.

Arjun Yadav, a 26-year-old whose father is a plumber, hit rock bottom financially during the Covid-19 times. It took a toll on his efforts to come closer to his dream. He reached out to popular radio jockey Anmol via Instagram to amplify his voice, and help him raise funds. Anmol took the initiative of starting an online fundraiser, which was then mobilised and publicised through social media. It worked out wonders in raising over Rs 300,000, which have been used towards buying a bow and arrow for Arjun. The target was achieved within 3 days and with over 130 contributors.  The equipment was bought from Ten Ring Sports in Patiala.

Amrita Rao says about the initiative, "I could see Anmol got genuinely emotional about the irony of a guy named Arjun not having a bow and arrow to fulfill his dream..His campaign was heartfelt & my contribution just a drop in the ocean of generous hearts that poured in  solid support from accross the globe".

Raveena Tandon added, “I am so happy to be associated with this special cause started by RJ Anmol for our National Archery Champion - Arjun Yadavarjun. As a nation, it's extremely important for each one of us to come forward and support our athletes who bring our country laurels on an international platform. I urge everyone to do their bit and help Arjun prepare himself and represent India at the Asian Games."

Thrilled about it, Arjun says, "I have always believed that when you want something, the universe conspires to make it happen. This time it was through Anmol sir. I had never thought a fundraiser could help me get the bow and arrow, but I am grateful to Anmol sir and to each contributor for helping me. I feel my responsibility to perform well and to make a name for myself has increased manifold after so many people have shown faith in me. I hope to make them proud with my journey. I would always be indebted to Anmol sir for this huge help."

Arjun's happiness knew no bounds when he was told that the target was met and he was given a glimpse of his equipment over a video call.