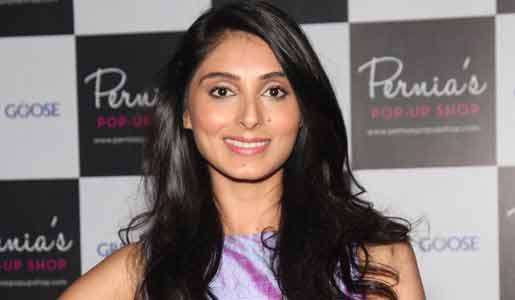 Fashion stylist and costume designer Pernia Qureshi is set to make her acting debut with "RAQS - The Dance Within", helmed by Muzaffar Ali, who along with his wife Meera will give a sneak peek into the film's ensembles via their fashion brand Kotwara at an ongoing fashion gala.

Pernia will be a showstopper for Kotwara at the BMW India Bridal Fashion Week (IBFW) 2014.

"For the Kotwara by Meera and Muzaffar Ali's upcoming IBFW 2014 showcase, Pernia Qureshi, who will be debuting in Muzaffar Ali's next movie 'RAQS...', will be coming on-board as the muse and the showstopper," said a statement released on behalf of designers.

During the show, scheduled to be held Sunday, Pernia will be seen wearing a creation she has adorned in the movie. It will serve as a teaser to look and feel of the movie.

The entire line will represent the best of Kotwara's past collections over the last five years in both styling and palette. Some of the highpoints will be pearls blended with sequins, chiffon blended with velvet and net blended with brocade to create a collage of textures, silhouettes and colours.

The collection presents the quintessence of the Awadh culture as evident in Muzaffar Ali's forthcoming film set in 1877. The filmmaker-designer is best known for "Umrao Jaan", starring Rekha and Farooque Sheikh.

Veteran actress Tabassum shuts down rumours of her demise: "I am ...