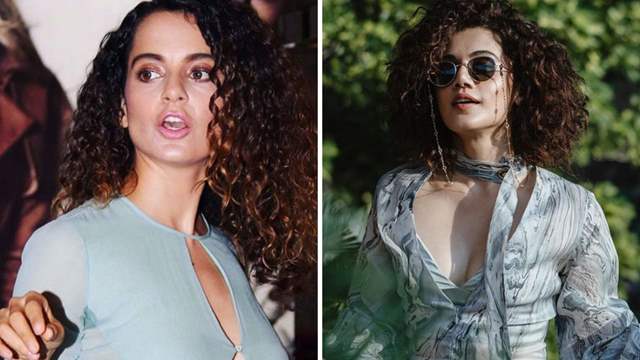 Earlier in the day, Taapsee Pannu broke her silence after facing the raid by the Income Tax department at her Mumbai house.

She rubbished the allegations levelled against her and stated that she does own a bungalow in Paris or received receipts of Rs 5 crore payment. In one of her tweets, she also gave an epic reply as she said, “P.S- “not so sasti” anymore.”

The ‘sasti’ comment was often used by Kangana Ranaut against Taapsee several times in the past. Kangana has also reacted to her tweet now.

Kangana responded to Taapsee’s tweet with an ugly reply and called her ‘rapists ka feminist.’

“You will always remain sasti because you are sab rapists ka feminist... your ring master Kashyap was raided in 2013 as well for tax chori... government official’s  report is out if you aren’t guilty go to court against them come clean on this ... come on sasti” Kangana Ranaut tweeted.

On March 3, the Income Tax department conducted raids at the properties of several Bollywood celebrities including Taapsee Pannu and Anurag Kashyap.

25 days ago Kangana needs a brain transplant, which will help her stop making idiotic remarks

1 months ago This woman is the lowest low of filth on this planet. Seriously the kind of gutter she spills. I've never felt this disgusted by another person. Despicable POS.

1 months ago She is such a low class person..not in status but in her attitude

+ 3
1 months ago Yaar, someone needs to buy a muzzle for Kangana Ranaut. She takes freedom of speech too far by making such crass statements against her peers.

1 months ago Sasti Tamasha going on 🤣🤣