View Profile
Is G.One - the robotic avatar of King Khan in the upcoming sci-fi movie, Ra.One - doing a "Dard-e-Disco"?
The first look of the movie seems to say so! 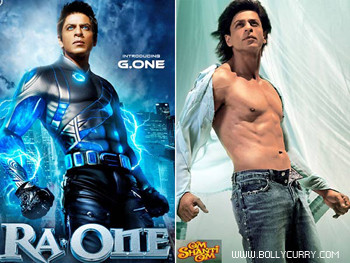 Apparently, teaser posters for the upcoming SRK - Bebo blockbuster, Ra.One, shares some stark similarities with 2007's King Khan starrer Om Shanti Om. The stance and the facial expressions of SRK exactly mirror one another in the two posters. While the costumes donned - bare chested for OSO, and in a form fitting techsuit for Ra.One; and the basic backdrop setting varies in accordance with the variation of plot theme, SRK in his element appears to be an overlap. And of course, neither of the posters venture to conceal SRK's perfectly carved abs.
What is the similarity for, we ask? Is it to garner the same kind of enthusiasm and appreciation Om Shanti Om received, or is the pose just becoming SRK's signature look? (Like the Kkkk...stammer!)
Whatever it may be, the movie due to hit the halls later this year is already a buzzing anticipation for Khan fans.
The current question being - what tales do the posters tell?!
Editor(s): Aradhna, Jenifer and Naseem.
21 Likes

Ashalata Wabgaokar passes away due to COVID-19
32 minutes ago

Zarina Wahab was Tested Positive for COVID-19; Actress ...
42 minutes ago