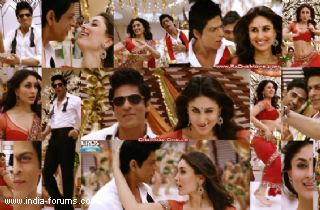 Shah Rukh Khan's 'Ra.One' has been generating curiosity since beginning and expectations have been high from its music as well. The album of the film lives up to the expectations, thanks to composers Vishal-Shekhar for packing a musical punch for the sci-fi movie.

The film offers 14 tracks, including remix versions and theme tracks.

It starts on a rocking note with the already popular number 'Chammak Challo'. A clear winner all the way, the song, which has Hindi, English and Tamil words in the lyrics, makes you groove.

An interesting thing about the track is that it's crooned by international artist Akoon, who has voiced not just the English lyrics but Hindi ones too. Hamika Iyer supports him by singing Tamil words. A fun dance number, 'Chammak Challo' is here to stay and it will surely become DJs' favourite.

The song also has a few other versions, including a remix by Abhijit Vaghani, another remix by DJ Khushi and an international version.

Then comes 'Dildaara', a mush melody at its best. Sung by Shafqat Amanat Ali, it has John Lennon's song 'Stand by me' mixed into it and the combination is interesting. The song boasts of various genres.

Then comes another Akon number called 'Criminal', a peppy and upbeat track that also has Vishal Dadlani and Shruti Pathak behind the mike. An amalgamation of Hindi and English lyrics, 'Criminal' is a perfect party number.

It also has a remixed version by DJ Amit. 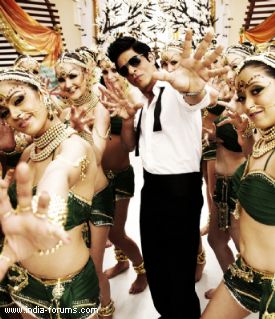 Next is 'Bhare naina' and it will make you sit up and take notice. The song has been sung by The Prague Philharmonic Choir, the chorus group that came here all the way from the Czech Republic to sing the song with Nandini Srikar and Vishal-Shekhar. If the semi-classical flavour in the number sets a pensive mood, use of orchestration takes it to another level. The choir makes the song sound very international, but its soul and feel are Indian.

Then there is 'Right by your side', an ordinary composition crooned by Sidd Coutto. A regular fast-paced composition, it is a happy and exuberant track.

'Raftaarein' reminds one of R.D. Burman compositions. Sung by Vishal-Shekhar, it is a perfect chase track. The style of composition is very similar to that of Burman and, despite being a situational track, it leaves its mark.

Up next is 'Jiya mora ghabraaye', a fusion of rock and semi- classical. It has a very strong musical arrangement and impressive vocals by Vishal Dadalani and Sukhwinder Singh and the song will be liked by hard rock lovers. Interesting composition and a good attempt.

Then the album offers three instrumental theme tracks called 'Comes the light', 'I'm on' and 'Song of the end'.

On the whole the album is worth buying and offers some interesting and entertaining tracks. Kudos to the music composers!