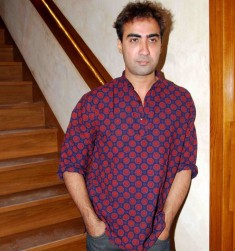 Life has come full circle for actor Ranvir Shorey - he is back on television to host the new season of dance reality show Jhalak Dikhhlaa Jaa Season 7. He started his career as an anchor-VJ.

Insiders says his cheeky sense of humor is perfect for the show and that he will forge a fresh equation with the judges and contestants.

Ranvir, who featured in films like "Khosla Ka Ghosla" and "Pyaar Ke Side Effects" is a die hard fan of the show's judge and actress Madhuri Dixit.

The two have previously worked together in "Aaja Nachle" and Ranvir is looking forward to interacting with her once more.

"Jhalak..." will be aired on Colors and a source close to the show said: "Looking at his fantastic comic timing during stressful situations in 'Khatron Ke Khiladi', we thought that Ranvir would be the best choice for 'Jhalak'."

"The creative team is certain that he would do absolute justice to the show as an anchor. He shares an excellent camaraderie with all the contestants as well as the judges. When we approached him with the offer, he was equally excited to take up the project and get groovy on the floor. People have known Ranvir for his comic timing, acting prowess. Then he showed his 'khiladi' side to the world. Who knows, now the viewers might get to see him shaking a leg as well."

After finalizing Ranvir, the makers are on the look out for a female co-host this season.

adigaag 6 years ago Good luck to Ranvir...How I wish Mona Singh would have been the female host...they would have killed it together literally...both have been superb and rocking hosts in the past...but this aint happening :(...koi naa I will not lose hope :)

LeadNitrate 9 years ago those photos are all around internet, and before it was even posted here, then whats the exclusive look that bollycurry brings?

Sonia_Soans 9 years ago Congrats, Happy that finally they got married... They have postponed their honeymoon plan too because of their next project Shaitaan

--jiya-- 9 years ago congratulations to the newly wed couple... wishing them a happy married life forever :)

Nikhi. 9 years ago Congratulations! Wishing them a very happy married life ahead!

RagMasta 9 years ago Congrats to the couple!! The wedding seems nice!

..KaJenDelena.. 9 years ago awww! I Love simple weddings somehow its more meaningful than grand weddings. I admire the simplicity of their wedding sooo cute =)

Congrats to the couple =)