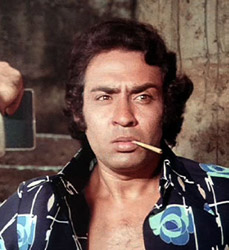 The brute, villainous Ranjeet is once again back to Bollywood, in his typical style. The actor will play a cameo in Leela Yadav’s ‘Teen Patti.’

When asked about his role he says, “I will play a role of a ‘don’.”

He further adds, “I was not very keen to do any more negative roles in the films and big screens did not have much to offer so I left and switched to small screen for better roles. However, it was on request of Mr.Amitabh Bachchan that I agreed to play a negative cameo for this film.”
This film has an interesting star cast headed by Big B, Shushmita Sen, R. Madhvan, Raima Sen, Mahesh Manjrekar, Boman Irani, Jackie Shroff, Danny Denzongpa, Irrfan Khan and Sharadha Kapoor.
The musical score for the film is given by Salim-Suleiman and Ambika Hinduja is the producer.
Leela Yadav’s last film ‘Shabd’ was no show on box-office.
Featured Video