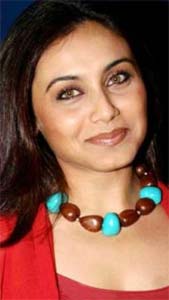 Rani Mukerji, who debuts on the small screen as the judge of Sony TV's new reality show 'Dance Premier League', impressed the whole unit with her punctuality and professionalism.

'She was there dot on time, ready with make-up on before some of the other celebrities had even arrived in the studio. Once on the sets, she proved her total professionalism,' said a source from the show.


'More than that, she has proved that she is a perfectionist. Even before the director could decide he needed another take, she called for it herself and redid the takes until she was satisfied with the result. It definitely pays to work with Aamir Khan at the beginning of one's career After all, a leaf from his book will only hold good,' added the source.