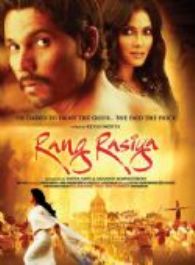 Mumbai, Sep 15  Ketan Mehta says his long-pending 'Rang Rasiya' will hit the screens in Novemeber as he has found a distributor who is willing the release the film, based on legendary painter Raja Ravi Varma's life.

'Rang Rasiya' will be released in November. We are working on the dates,' Mehta told IANS.

The movie is a sensuous love story about the great painter and his muse, a woman called Sugandhabai. Randeep Hooda plays Ravi Varma, while Nandana Sen will be seen as the muse. Ready for release since 2008, the bilingual 'Rang Rasiya' courted controversy for the number of sensuous scenes.

'It's a controversial subject and it's a not an economical film. It's a historical drama, a big film with a relatively new star cast, so releasing it was a challenge and finally we have found a distributor who is taking up the challenge and is courageous enough to release the film,' he added.

After the release of 'Rang Rasiya', Mehta will start scripting his next film.

'Immediately after the release of 'Rang Rasiya', I'll start another film. It's too early to talk about it, so I can't give the details at the moment,' he said.

It was reported that all was not well between Minissha Lamba and Pia Trivedi on the setes of 'Hum Tum Shabana', but things became normal when the former helped the latter in a scene.

On the sets Pia was seen building a rapport with the other actors - Tusshar Kapoor and Shreyas Talpade and director Sagar Bellary - but she was not so friendly with Minissha.

However, things changed when Minissha helped Pia in delivering a scene.

'Pia was extremely tense about one particular scene in the film, which after numerable re-takes was not okayed by the director. Sensing her nervousness, Minissha helped Pia out. Minissha then rehearsed the scene thoroughly with Pia, contributing to certain nuances which Pia eventually incorporated in the scene,' a source from the unit told IANS.

'Post this, Minissha would often get food from home to share with Pia which they would eat in each other's vanity vans,' added the source.

'Love...' has slight resemblance to 'I'm yours': Salim Merchant

Few portions of the song 'Love love love' from the film 'Love Breakups Zindagi' reminds listeners of Jason Mraz's 'I'm Yours' and composers Salim -Sulaiman say that the resemblance was unintentional.

'When we created the song after that someone who heard the song told us that it sounds a bit like 'I'm yours'. I realized that there is a slight resemblance. But that happened unintentionally, without the intention of copying it.

'Honestly, I wanted to change it, but Sahil (director Sahil Sangha) was like that it's okay because it has just a slight resemblance,' said Salim.

'When we make a song, sometimes couple of notes go close to some other song. But if you have a clean heart and it is unintentional, then I think even god forgives you,' he added.

'Love Breakups Zindagi', a romantic comedy co-produced by Sahil Sangha, and actorsw Zayed Khan and Dia Mirza who are also playing main lead in the film.

I create work for myself: Kalki Koechlin

Actress Kalki Koechlin rose to fame with her debut film 'Dev D', but things didn't get easier for her immediately. She actress says she is self employed person so instead of sitting and twiddling thumbs while waiting for a call, she creates work for herself.

'There has been times when I didn't have work. Everyone thought that after 'Dev D' my life became easy. But actually I was unemployed for a-year-and-a-half. What I did was that I created work for myself. I wrote a play and then we put it up. We performed it for a year. I have always believed in myself and that I will push myself enough to create work for myself,' Kalki told IANS.

'I am self employed so I cannot be sitting and hoping for a phone call. If work is not coming for me, I create work. I hope that I am efficient enough in that sense to survive in the industry. I just hope to carry on doing what I do. I've not thought about making sure that I have a career for 10 years. For me, next challenge is what I have now,' she added.

The actress, who recently got married to filmmaker Anurag Kashyap, has acted in films like 'Shaitan', 'Zindagi Na Milegi Dobara' and 'That Girl In Yellow Boots'.