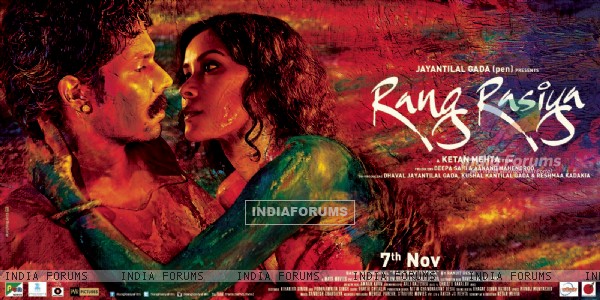 Rang Rasiya the film, produced Maya Movies Pvt. Ltd. & Infinity Filmed Entertainment, and directed by the noted Indian filmmaker Ketan Mehta is a dramatized version of the novel "Raja Ravi Varma" by Ranjit Desai and does not claim to be a true story.

Though the film has been very well received across several noteworthy international film festivals and audiences across the globe has appreciated the film, certain individuals have taken objection to the portrayal of Raja Ravi Varma in the film and thereby to clarify the same the disclaimer has been added. Director Ketan Mehta says, "Rang Rasiya tells the story of a great artist. This film pays homage to art and artists and does not intend to malign the image of any person living or dead."

A special disclaimer has also been inserted in the beginning of the film that reads as follows: "This film is a dramatized version of the novel Raja Ravi Varma by Ranjit Desai. It is not anybody's true life story. All characters shown in this film are fictional and do not have any resemblance to anyone dead or alive."