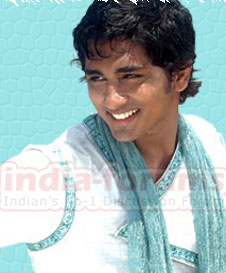 Mumbai, Oct 27 (IANS) After Shah Rukh Khan as hockey coach in 'Chak De! India' and John Abraham as a football pro in the soon-to-be-released 'Goal', it's 'Rang De Basanti' fame Siddharth's turn to endorse a sport in a film.

He is set to be a carrom player in Chandan Arora's third feature film. Entitled 'Striker', the film's main protagonist Siddharth's character will be based on the life and times of a real-life carrom whiz from the slums of Malavni named Suryakant.

Siddharth, who has said a firm no to several good offers from Mumbai including Rakeysh Mehra's 'Delhi 6' and David Dhawan's film for UTV, has quietly been preparing for the new challenge.

A carrom player from the outset, Siddharth has been polishing up his skills.

'Siddharth has become an expert at carom. By the time we hit the floors in December Siddharth will be able to beat anyone at the game. He has met the real-life Suryakant several times. He has also spent sizeable time in Malavni getting the feel of the place. Though he functions from the south he has spent a large part of his life in Delhi and Mumbai. So he speaks very fluent Hindi,' Arora told IANS. 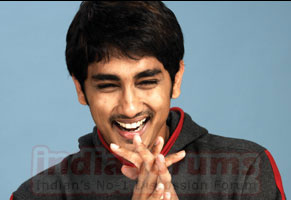 Set in the 1980s, the film will move through a labyrinth of socio-cultural political issues as seen through the eyes of the slum-protagonist.

'Unlike Dharavi, which is a planned slum, Malavni just happened. People and communities from all across Mumbai who were rendered homeless just converged on this slum. So to begin with, it was more a refugee camp than a slum,' said Arora.

Arora, who worked closely with Ram Gopal Varma before breaking loose, will be shooting the film on location in Malavni and also recreating key scenes and situations on sets. 'But the game of carrom will preside over the goings-on, just as it does in the slum. Lakhs of rupees go into betting over the game. Carrom is a way of life in Malavni,' explained Arora.

The rest of the vast cast is now being worked out. But Vidya Malvade from 'Chak De India', model Nicolette Bird and south Indian actress Padma Priya have been finalised.

Chandan, like Shimit Amin, who made a terrific hockey film after leaving Ram Gopal Varma's 'Factory', is all set to give another game a hand up.