View Profile
The eye candy boy, Ranbir Kapoor created ripples when he bared his posterior in a blink and miss 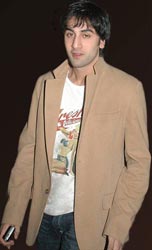 Featured Video
towel dropping scene in his debut movie, Saawariya. The movie flopped at the box office but the Kapoor lad became an overnight sensation stealing hearts of girls and ladies alike. Recently after, Ranbir gave his heart to the 'Om Shanti Om' fame, Deepika Padukone and the duo painted not only the towns but also the airports red!


Well, behind this sensational face there is a lot more. Nothing stopped the handsome hunk from revealing his teenage sex & drugs escapades. In a recent interview he spilled the beans and admitted loosing his virginity at the tender age of 15! However it does not end there. Ranbir also tried alcohol, cigarattes and marijuana during his teenage years. Quite surprising?


Wonder what Ranbir mother, Neetu Singh and his girlfriend, Deepika have to say on this? Moreover, what is Mr Ramadoss, India's Minister of Health who has been over zealous in his anti smoking campaigns, thinking?


So, do you think its right for a Bollywood star to talk about his 'personal' life openly?