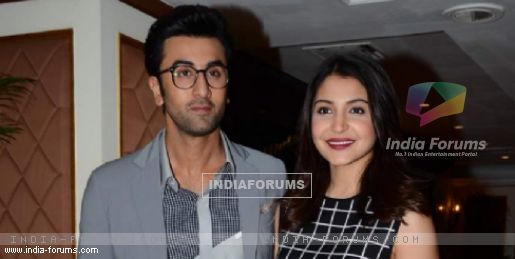 Students of a private university here on Wednesday danced in the rain on the tunes of "Fifi" from "Bombay Velvet" when its stars Ranbir Kapoor and Anushka Sharma arrived.

The students were overwhelmed with enthusiasm despite the sudden downpour.

The tents at the venue were not waterproof and umbrellas were made available to the stars during the unseasonal rain. But the celebrities decided not to use them and had fun amid the downpour.

"I thank the SGT University management for inviting me and Anushka here, SGTU, Gurgaon is one of the upcoming universities in India and I wish you all the best in life", said Ranbir.

Anushka was touched by the spirit of the students, who patiently waited for the stars for three hours.

The stars cheered them up and insisted upon their watching the Anurag Kashyap directorial, which is releasing on Friday.

The SGT memento was presented to Anushka by Chairperson Madhupreet Kaur Chawla and to Ranbir by Chairman ManMohan Singh Chawla.

Along with the students, the staff members were also present on the occasion.