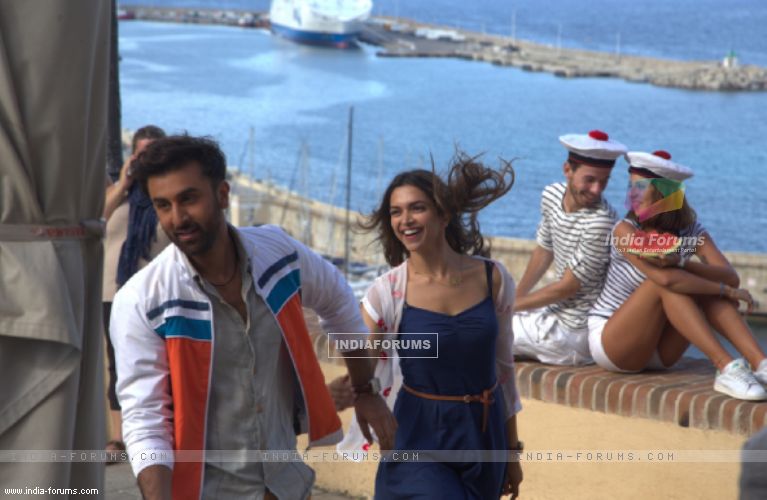 Imtiaz Ali's directorial 'Tamasha' has been in the news for quiet sometime now. It's one of the most awaited movies of the year as it stars ex-flames Deepika Padukone and Ranbir Kapoor opposite each other.
The fans are eagerly waiting to witness the sweet chemistry of this beautiful on-screen couple and when the news of the wrap up of the shoot comes out it becomes more exciting as the movie advances in the post production stage and we get to see more glimpse of the flick.
As reported earlier, the final shoot of the movie that was scheduled for Mumbai has been wrapped up and now we hear that on the last day of the shoot the lead actors Ranbir and Deepika broke down in front of the unit.
They say goodbyes are always difficult and this is what exactly happened with our beautiful pair.
According to reports in a leading daily, Ranbir and Deepika broke down in front of the whole unit after the completing the last schedule.
An insider was quoted saying, "It was the last day of our shoot and the final days do tend to get emotional for the whole unit. But this was something else altogether. Both Ranbir and Deepika broke down. We were all taken aback, since these two are not known to be demonstrative of their emotions". [sic]
Another report says that, the makers of the movie have planned to celebrate the 'Tamasha' wrap up along with the cast and crew. They have organised for a party tonight that will be held at Sajid Nadidawala's place in Andheri.
A source was quoted saying, "Sajid and Imtiaz want to celebrate with the team and hence they decided to arrange for this party. Also one doesn't know when will Ranbir and Deepika work together again. Hence keeping all that in mind they thought of throwing a party only for the cast and crew of the film". [sic]

5 years ago when you have truly loved someone, you cant be friends with them once separated
those feelings never fade
but hey, these 2 have been very professional to my opinion..looking forward to the movie

+ 3
5 years ago I so love to see Deepika and Ranbir together...i still think they have not moved on from each other...well my opinion that is ...

quackack 5 years ago I think ranbir and deepika love is true love..i don't the same between ranbir and katrina it looks fake and katrina looks so boring she is always full of attitude i don't find that in deepika who is more down to earth and respectful.. ranbir i don't know what you see in that katrina she is full of attitude just leave her n come back to your true love (deepika)

+ 3
5 years ago I miss these guys together. They complemented each other so well.

I hope you two get back together.

+ 2
5 years ago love these two alot. i hope they stay touch together even aft the movie
wanna see them as couple soon