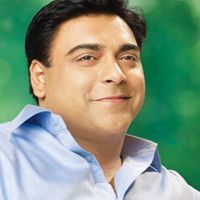 Versatile actor Ram Kapoor who is currently seen in Bade Acche Lagte Hai on Sony TV has not only gained immense popularity in Television but has been applauded for his outstanding roles in Films as well. As the actor is flying high with the success in the films, the talented actor wants to concentrate on films right now.


Well in the show Bade Acche Lagte Hai too a track had to be introduced to make Ram's absence valid. Thus he was shown to be accused for Sammy's murder and put behind bars. Ram was not seen in the show for a couple of weeks. This break was due to his commitments as he had blocked his dates for the upcoming Bollywood film Humshakals. And after completing his shooting for the film he resumed on the sets of Bade Acche Lagte Hai. But now finally he has decided to bid adieu to the show as couple of films are lined up.

Our source states, "The actor will start shooting for a film titled 'Patel Rap' with Sunny Leone and for which he will to travel a lot and thus will not be able to give time for the show. Two more films are lined up which will be soon announced by the makers. "

As there are reports that the show Bade Acche Lagte Hai will soon go off air and with Ram Kapoor's exit the show will have to suffer a lot as he plays one of the central characters in the  show. With his exit, the show might not go well and thus may not get the extension.

anupam_dil 6 years ago We will miss RAYA in the show...All the best Ram...

greatsaleen 6 years ago Good for him! Sony shows start fab but loose steam rapidly! BALH was my fav until the whole Ram and Mrs. Ram separation ...

WhenInRome 6 years ago i'm glad to hear that the show is ending. Really. Its so crappy these days. I can't beleive it was one of my fav. shows once :(
CVs have damaged it very badly. Ram made right decision to quit the show. Waise bhi there was nothing much left for him in the show. They are showing lousy & nonsensical tracks. Its high time BALH should end.

Fun_Reloading 6 years ago what!!! i thought the show ended long back

anyways all the best to actor

Mani-RK 6 years ago all da best for ur movies sir looking forward to them loved u in mission sapne,all da best fr humshakals n waiting for da first look of aayi bala waiting to see you n konkana together. heard u have signed two more films waiting fr the confirmation.

shanak.hot 6 years ago Can't believe that this used to be one of the best shows. Seriously they just killed the vibe of this show.

zeezee09 6 years ago I know there are many fans of Ram Kapoor and I might be bashed left and right for what I am going to say.

I am glad he is leaving Bade Ache... because since many months he was shown standing with a poker face doing nothing. I don't think that is all he can do. No spark or any acting came forth from him. On the other hand, even in his chota-mota (no pun intended) roles in films he was just the opposite, well almost!! Strange eh? Seemed he was no longer interested in acting on TV serials anymore.

Shaina_b 6 years ago Good that finally it is ending!!!!