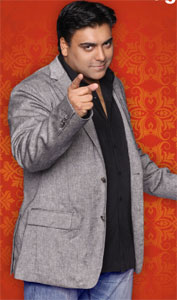 After being there to give moral support for his surrogate 'sister'  Rakhi Sawant during her swayamvar, Ram Kapoor has now taken up another cause- that of environmental friendliness. Ram Kapoor sounded like Obama during his rally days as the key word of his short address to media was 'change'.

Ram said, "Change is always welcome. And even God will only wish that change happens and the society and people grow." He further added, "Change is good, but, change for the better is even better."

He also went on to talk about the eco-friendly Ganpati that they have placed in their shoot spot.

Ram also spoke about the problems that arise between parents and children due to the generation gap. He said, "Parents nowadays face many problems because their children find it hard to understand them, their difficulties and problems."

Inevitably he went on talk about Basera, his new show  on NDTV Imagine that deals with the issue of indifferent off springs. Ram said, "We have seen a lot of saas-bahu shows. So now its time to watch Basera, which deals with problems faced by mothers and fathers."

Basera is aired at 9:30 pm all through weekdays on NDTV Imagine.

+ 2
13 years ago thats awesome. i wish everyone thinks like him. i liked the obama part of the article. LOL.

+ 2
13 years ago I love Ram in Basera! Best of Luck and hope that Basera does really well!

13 years ago Aww...he is too sweet, and he's awesome in Basera. I just love him.