View Profile
The Challenge that Ram Gopal varma had announced in 2008 during the release of his horror movie PHOONK is back again with its sequel..


Writer Milind Gadagkar's directorial debut film PHOONK 2 is ready and slated for release on 9th of April, 2010. Same as part 1 the sequel Phoonk 2 is also tagged as a horror film and one of the scariest films ever to be made in Bollywood. 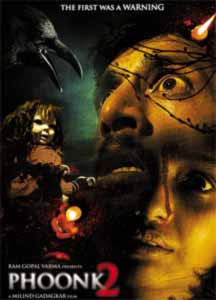 Before the release of "PHOONK" in 2008 the phoonk team had challenged the viewer to dare and to see the film sitting all alone in a theatre and not run out scared then will honor him with a Cash Prize of Rs.5 Lakhs. But the contestant who took the challenge didn't even last for 30mins and ran out of the theatre. After the release, some people alleged that the contest was rigged and that they never felt fear while watching the film.

So this year without going into a pointless argument on the same, the Phoonk 2 team have decided to open themselves to a scientific evaluation of that claim


Scientific evaluation in the contest this year:

For "PHOONK 2" this year the team has decided to implement their Contest in a very scientific way as never ever done before in the history of Cinema anywhere across the World.

The contestant who dares to be a part of the contest will be fitted with an ECG machine while he is watching Phoonk 2 which will monitor his Heartbeat and Pulse rate and this will be shown live on a screen outside the theatre to both the Media and all concerned.


The scientific aspect of it:

A normal person according to professionals has a certain average heartbeat and when subjected to any kind of an intense emotion the beats considerably go up. So if the challenger claims that he had no fear while watching Phoonk 2 the monitor will tell whether he is lying or not and on the other hand if he can control his fear and thereby his heartbeat and not let it cross his normal heartbeat then he will get to win the cash prize.

The contest has been launched today on 10th March 2010 on their official website www.phoonk2.in. But this contest is Restricted to only healthy people with no history of Cardiac disease and also only to people who are between 18 and 60 years of age.

The contest will be open for people across INDIA and based on a computerized random draw people will be shortlisted, who then further will have to give a medical indemnification for further selection by their team and a medical professional who will eventually single out the final Challenger to be subjected to the test. The Challengers normal heartbeat will be recorded before and while the screening is happening. They will also make sure that the contestant is actually watching the film without closing his eyes by shooting him Live through a night vision camera and showing his facial expressions to the media and all concerned on a screen outside the theatre. If at all he wins this challenge he will be awarded the Prize money right at the Venue in front of everybody.

Also for any unforeseen situations an Ambulance will be on standby at the Theatre to monitor the contestants.


So, the film PHOONK2 staring Sudeep, Amruta Khanvilkar, Ashwini Kalsekar, Ahsaas Channa, Neeru Bajwa, Amit sadh and Rishabh Jain apart from others is complete and ready to be released exactly a month after. So,  the PHOONK 2 Team DARES any viewer to take this Challenge and watch PHOONK 2.