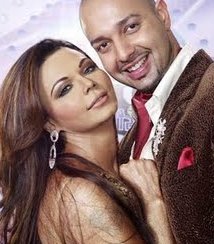 Rakhi Sawant continues to be engaged to Toronto-based businessman Elesh Parujanwala, a source from NDTV IMagine said denying reports that the couple have broken up.

'Rakhi has not called it splits with Elesh. The couple are still seeing each other and very much together', said an insider from NDTV Imagine, on condition of anonymity.

Rakhi and Elesh got engaged through the reality show 'Swayamvar'. Though the item girl-turned-actress had recently told IANS that she is jittery about marriage and motherhood after having to change diapers and sing lullabies for a baby boy for NDTV Imagine's show 'Pati Patni Aur Woh', the news of her giving Elesh the boot is a 'media hype', said the channel source.

'Rakhi has not broken off her engagement with Elesh. This is only an unnecessary buzz that media has created. She is very much with him. She has in fact been noticed being very cosy with him,' the insider added.

The news of the split came, in effect, after it was reported Monday that Rakhi decided not to marry him citing 'irreconcilable differences'.

The pair has also been visibly sporting their engagement rings and cuddling a number of times, as observed by an IANS correspondent during a recent visit to Candolim, Goa where the couple is learning the hardships of parenting on the sets of reality show 'Pati Patni Aur Woh'.

Rakhi was unavailable for comment as phones are not allowed inside the 'Pati Patni Aur Woh' sets.