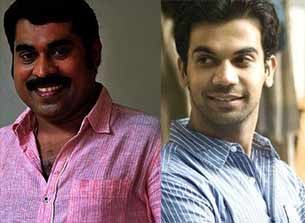 As per the jury, Rajkummar's portrayal of the intriguing journey of a Muslim young man who is persecuted, and who rebels and ultimately comes back to fight the injustice as a committed law abiding lawyer, brings to life the soul of Shahid Azmi.

On the other hand, Suraj's "dignified and quiet" portrayal of a man on the lower margins of the society, has been applauded as the actor "soulfully brought out (the character) with subtle body language and eyes which transcend words".

Geetanjali has been awarded for "merging completely into a role and look the character to perfection" in "Liar's Dice".

In the best supporting actor category, Saurabh Shukla has won for his work as a judge in "JOLLY L.L.B.". His heart-warming and exuberant performance as a judge, who discovers his authority and conscience in the process of conducting a high profile case, is what left the jury impressed.

The best supporting actress award is shared by Amruta Subhash for Marathi film "Astu" and Egyptian actress Aida El-Kashef for "Ship Of Theseus".

In "Astu", Amruta "touchingly portrays the emotions of a poor woman who brings to life compassion and warmth in dealing with human relationships".

Aida's sensitive portrayal of a blind photographer who entirely depends on her intuitive creative power and has a fiercely independent mind, captivated the jury.

In the best child artist category too, there are two winners - Somnath Avghade for Marathi film "Fandry" and Sadhana for "Thanga Meengal".

In "Fandry", Somnath plays the role of a Dalit teenager to perfection, while Sadhana has carried her part of a dyslexic child with sensitivity and exuberance and yet with ease.

Malaika Arora shares her biggest challenges upon Testing ...
22 minutes ago