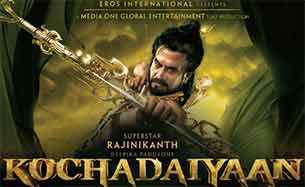 A week before the release of Tamil period-drama "Kochadaiyaan", superstar Rajinikanth is expected to start shooting for his next film titled "Lingaaa", which has been named after one of his grandsons.

Lingaa is the second son of actor Dhanush and his wife Aishwarya, who is Rajinikanth's daughter.

"The film has been titled 'Lingaa'. If all goes well, we might start shooting from the first week of May. I can't reveal more details about the project at the moment," a source from the film's unit told IANS.

K.S. Ravikumar, who will be directing the project, shared a poster titled "Lingaa" on his official Facebook page Tuesday.

In the poster, actresses Sonakshi Sinha and Anushka Shetty and A.R. Rahman are featured with the superstar.

Double Oscar-winning composer Rahman will compose the tunes for the film, which will be his seventh project with Rajinikanth.